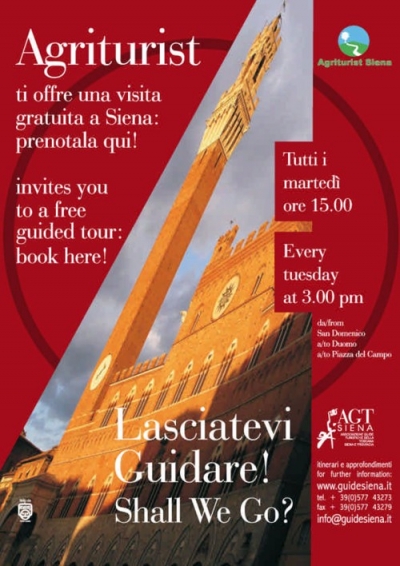 GUIDED SIENA: This email address is being protected from spambots. You need JavaScript enabled to view it. - WWW.GUIDESIENA.IT

A guided tour in the wonderful city of the Palio, that will give you the opportunity to admire the wonders of the historical city center of Siena, the monuments, the squares and the breathtaking cityscapes.
The tour ends at the International Chef Academy of Tuscany in Siena with a cooking course, that will permit you to know and realize some of the typical recipes of tuscan culinary tradition. With the help of professional chefs, you will have the possibility to try an exciting experience, immersed in culinary art. At the end of the course you will taste the prepared dishes. Duration of the course in the Academy: 3 hours. A unique opportunity to visit Siena between art and taste with our guides.

Siena Unesco City Site
With its magnificent Campo square and its imposing Cathedral, Siena opens its heart to you
Guided tours Hiking

Palio and Contrads
The roll of drums and flag-waiving follow the Sienese people throughout all their life. The contradas are ancient medieval districts but still the backbone of Siena City
Guided tours

San Gimignano and the Vernaccia Wine
Miraculously hidden by the fog, thanks to the bishop of Modena, the city with one hundred towers has preserved its glory and aspect, even today
Guided tours Hiking

Colle Val d’Elsa and Crystal
From Arnolfo di Cambio to Jean Nouvel, this city will impress you with its energy and capacity to renovate itself. Colle owes its richness to the Elsa river, which first allowed for the development of its wool industry, followed by paper manufacturing, and today the production of crystal
Guided tours Hiking

guide siena certaldo
Certaldo and Boccaccio
Friar Onion wanted to impress his followers with the feather of the Archangel Gabriel, but he found only lumps of coal and smartly he passed them off as relics of the martyrdom of Saint Laurence
Guided tours

Chianti Shine and Wine
Chianti Tours: You will not only find Chianti DOC and DOCG wines, but also castles and little boroughs hidden among the vineyards of Sangiovese, Malvasia, Trebbiano e Colorino
Guided tours

Saint Galgano and the Sword in the Rock
A town of only ruins now, but long time ago it was a very healthy abbey just a few steps from the place where Saint Galgano converted himself and his sword became a cross
Guided tours

Buonconvento
A hospice for pilgrims and a place of death for Henry the VII, Buonconcvento has been declared one of The Most Beautiful Boroughs in Italy
Guided tours

Monte Oliveto Mother House
Known as a place of spiritual retirement for Saint Bernanrdo Tolomei, and a place of high artistic value thanks to the frescoes of Luca Signorelli and the eccentric Sodoma
Guided tours

Asciano and the Sienese Clay Hills
The landscape of the Ambrogio Lorenzetti is famous for the fresco of the Good Government is still evident when you cross this part of Tuscany, scattered with gullies and biancanas
Guided tours

Pienza and Pope Pio II
Dream of Enea Silvio Piccolomini, its own jewel among the olive trees, Pienza will surprise you with its Renaissance shapes and its Medieval charm
Guided tours

Saint Quirico and the Orcia Valley
Saint Quiric is documented as stop XII by the Bishop of Canterbury, during his journey back from Rome in the year 990
Guided tours

Montalcino and Brunello Wine
A region known for not only its wine, but for tourism as well. In the Fortress is where the Sieneses sheltered to escape the Florentine lordship
Guided tours

Montepulciano and Nobile Wine
In his Bacchus in Tuscany, Francesco Redi wrote “Montepulciano is the king of every wine”, he referred to the taste or to the fact that noble people were involved in the production; we let you believe what you prefer
Guided tours

Chiusi e gli Etruschi
And now we should tell about the Italian [labyrinth] that Porsenna, king of Etruria made for himself as a tomb, and at the same time to exceed the vanity of foreign kings. But as gorgeousness is over the imagination …., Plyni the Elder Naturalis Historiae

Chianciano and the Spa
Our grandfathers would have referred to it with an Italian rhyme Chianciano fegato sano (healthy liver) but this thermal city has come a long way, and it is now a posh spa spot
Guided tours

Amiata Mountain and Abbadia San Salvatore
From the sacred wood for the Etruscans to the powerful Benedictine abbey of Saint Salvatore during the time of Charlemagne, from the little medieval hermitages where Saint Bernardino served his novitiate, to the Jurisdavidic devotees of David Lazzaretti in the XIX c., Amiata is for everybody the Sacred Mountain